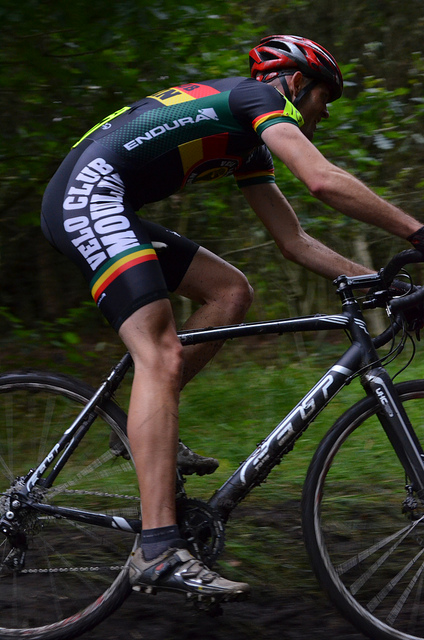 It’s been an improving picture through the first four rounds of the NW Cyclocross League.  It started pretty badly for me at the opening round in Preston and then got substantially better.  I’d only come back from that trip through the Pyreneese two and a half days earlier, so in hindsight I shouldn’t have been expecting great things.  Over 700km of long, mountainous miles in the legs the week before certainly isn’t the greatest prep for cross.  That and the cold and wet made me realise – I’d grown rather fond of nice hot weather.

We had a big strong turn out with it being a Cat A event at the start of the season.  Paul Oldham won and made everyone else look pedestrian on a pretty challenging course – very wet, with lots of off-camber bits and loads of turns.  Far, far behind Paul my race was a bit crappy.  I started OK, but then drifted slowly backwards seeing the guys I know I should be competing with pull away from me.  I couldn’t respond and found it hard to get into any ryhthmn.  I finished a slightly grumpy 22nd.

After that I made the mistake of panic training.  It took a couple of days for me to stop digging myself an even deeper hole and take it easy for a bit.  Had to remind myself that in Cyclocross, like many sports, the first race is always the hardest and I was bound to get sharper with a couple of races under my belt.

That theory was proven the following weekend at round 2.  Another Cat A event, another big field of about 150 and another good course near Bolton.  I’ve enjoyed racing at this venue before and found myself getting stuck in at the pointier end of things from the off.  Feeling a lot more like I would have hoped for the first two thirds of the race, I was in a good position.  I did tire a bit towards the end but only dropped a couple of placings.  Nick Craig won this one.  I ended up 11th, which by my maths is twice as good as the first race.

Similar pattern for round three of the series: Cat A, 150ish starters, good course and a better result.  This one was held in a park around the back of the Manchester Velodrome, which I had no idea existed.  On the day the sun was out and the temperature was unseasonably warm, but during the previous week it’d rained loads leaving the course really muddy and slimy.  It was a very short lap, could have done with being twice as long, but I liked it.  Found it all rideable, even the steeper, more techy sections that many were running.  My start wasn’t great, but I soon worked my way up through the field and had clear sight of the course ahead by the start of the second lap.  Nick Craig was again the winner on the day, I was the last of the riders to finish on the same lap crossing the line 7th.  Later on it was pointed out to me that I was actually the first senior finisher (1-6 being either buy klonopin 9mg Vets or U23).  So I’ll count that as a win!…  Of sorts.

Roll on to round 4 at the fantastically named Boggart Hole Clough.  I’ve always liked this course, always seems to suit those with a bit of MTB background – a good bit of up and down, plenty of roots and the like. The place lived up to its name, being badly affected by the nasty wet summer and the downpours of the previous week.  On pre-riding it I thought it was horrid, all claggy and boggy and wet.  Once the whistle went and it was hit at race pace it came to life.  Loads of squirming all over the place and fighting to keep the bike going in roughly the direction you had planned.

Moving up through the field on the two start loops and then into the lap proper I felt good and strong.  I got into some of the boggiest sections before the bulk of the riders, had to do some running but at least I wasn’t being held up.  I squeezed passed a couple more riders then realised I was up to third place.  Quite an unfamiliar place for me to be. Another technical section down and I’d managed to close in on Paul Bethell. More rooty and slidey bits and I’d got a bit of a gap. I was in second spot with a little room.  I didn’t know what had come over me!  Towards the end of lap one I even got up to the wheel of eventual winner Giles Drake.  That didn’t last long though as he cruised off into the distance.  Paul caught me again by the end of the opening lap and I started to think I’d gone off way too hard and was going to drop back stone-like.  But I stayed with him for the next lap chopping and changing positions a few times.  Eventually he proved much stronger than me and pulled away.  Another strong looking guy passed me on the next lap.  Still 4th though and I was hanging in there.  Then I briefly dropped down to 5th as a rider I’ve had a few close races with got infront of me.  This time I was able to respond and attacked straight away establishing a good gap again.

Mid-race my bike was heavy with mud and my gears where jumping all over the place being completely clogged.  But without the luxury of a spare bike/pit bitch I plugged on, grabbing handfuls of mud out of the bike whenever I was having to shoulder the bike.  With two laps to go I spotted the chap in 3rd spot on the side of the course trying to poke mud out of his bike with a stick.  Ha! Third again!  Every corner I checked over my shoulder for chasing riders, but every time there was just clear space.  Emptied the tank on the bell lap, nearly came a cropper on a number of ocassions, spending lots of time sideways or dragging my limbs through brambles in the undergrowth.  Stayed upright all the way though and secured 3rd place.  By far my best Cyclocross result to date.  Quite chuffed really 🙂