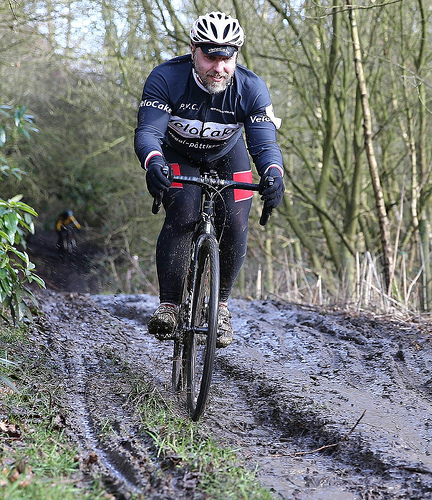 The Hit The North races have been going for a few years now but until yesterday (16th Feb) I hadn’t got around to taking part in one of them. The promise of new swoopy trails, friendly racers, Wham bars and Joe’s Minty Balls was enough to entice me this year.
Got to the event nice and early and bumped into Jase – Strathpuffer winner, World Solo 24Hr runner up and more importantly organiser of Hit The North (along with many helpers) – for a quick chat before heading off to get registered and receive my free Wham bar. Also managed to find Dave who had kindly agreed to lend me some lube.

The lead up to the race was spent getting the bike ready, pinning race numbers on and pottering up and down the hill to warm my legs up (which they protested to a bit having commuted 270km in the previous 3 days). Bumped into plenty of familiar faces along the way, everyone enjoying a rare appearance of a big yellow thing up in the sky!

All too soon the race briefing was over and we were herded off to the start which was gridded so that the fastest riders started at the front with those of lesser ability starting further back. I decided to start right at the back, it seemed friendly back there 🙂 We were soon off, although not very quickly as there were lots of people in the way, not that any of us seemed to mind. The first half of the first lap was mainly spent queuing behind people every time the course narrowed but things soon spread out and I set about moving myself further up the order. My legs weren’t too keen on this idea but on lap 2 they started working properly (maybe shocked into life by the field of despair!) and I started having some fun.

Was good to have plenty of people cheering me on around the course too (Al, Sarah, Ed, Ali, Ali, Ann, Skye, Jules & Jane to name but a few!)There was a small blip in my progress through the field as I blindly followed one of the Here Come The Belgians riders off course which added a bit of distance and cost me a few places but I was soon back on it. The bell rang at the end of that lap which meant lap 4 would be my last. Tried to speed up a bit but was pretty tired by now. Caught and passed a few more riders and had a little sprint finish, passing two and narrowly missing passing another on the line when he quite rightly shoulder barged me out of the way 🙂

Hung around for a fair while after the finish catching up with friends and watching the podium presentations before dragging my tired body home. Great event, fantastically organised and loads of fun. Chapeau to all involved 🙂

There were many people around the course taking photographs, please take time to check out the galleries from…

The Unofficial Results have me in a rather magnificent 171st place. I briefly wondered where I’d have finished if I hadn’t started right at the back but to be honest I don’t really care! If you’re looking for an event to do next year then I can highly recommend putting this one on your calendar.