JOURNAL: Just get outside and ride 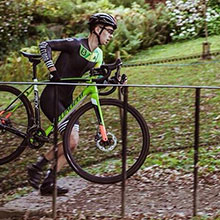 Just get outside and ride

I had arranged to go for a ride with a friend this morning.  But we decided to sack it off at the last minute because the weather was a bit grim.  Not monumentally horrid, just miserable enough to dampen down our enthusiasm and make re-scheduling seem like a better idea.

The problem is I get cabin fever very quickly.  I spent the next couple of hours kicking about the house being a bit grumpy having had my plans scuppered.  Feeling bored and like I was wasting my day off I took a look at a couple of videos that another one of my hombre had posted online – in an attempt to pull myself together.  First was a nice highlights film of last weekend’s Cyclocross world champs.  I had already watched the races live, which buy klonopin 6mg were awesome, but this little film captured the event and conditions really nicely.  After that I clicked to watch some guys on the other side of the Atlantic racing bikes on a frozen lake.  That was enough to remind me that; 1) riding in less than ideal conditions often produces the most epic/rewarding/funniest rides and 2) it’s not all that bad out there anyway, so man up and get outside!

Inevitably, I really enjoyed the ride.  Just remember, getting out of the door is always the hardest part & it’s too easy to make excuses.

Anyway, if you’re in need of a little inspiration take a gander at these…

A day at the races: 2013 UCI World Cyclocross Championships from Gizmo Pictures on Vimeo.